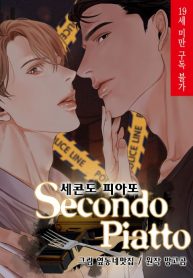 The sympathizing romance between two men letting go of their unrequited love?!Tae Hyun-wook is the young team leader in charge of the Violent Crimes Unit who graduated from the National Police University. He believed that someday he’d marry Heesun, his female friend for whom he bears a long-time one-sided love. “Hyun-wook, I’m getting married.”At the announcement of Heesun’s marriage, Hyunwook pretends hard to look calm and congratulate her. Besides, to help her prepare for the wedding, he even stupidly meets her in a restaurant called ‘Secondo Piatto’ in an attempt to put on a prideful act… Seo Wonyoung is the owner and chef there. He’s an old friend of Minseok, Heesun’s soon-to-be husband. But the detective’s intuition tells him that there’s something odd in the way Wonyoung looks at Minseok…? At first he pretends it’s just a passing coincidence, but he proves himself right on the wedding day, when he sees Wonyoung, on his knees, crying out for Minseok in the empty restaurant…!