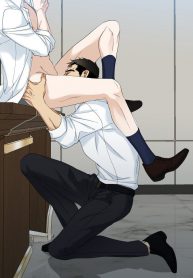 Choi Moonhyuk used to be a fighter for an illegal club. He will do anything to protect his brothers. On the day of his supposed 15th consecutive win, he ends up losing and is sold to Daebuho’s son, Seo Yeonjin. In accordance to the shameless Yeonjin’s plans, Moonhyuk ends up being his mad dog and winds up under his leash.

You can discover many yaoi smut

Lots of yaoi games, anime yaoi comics are only here